The Alliance of Democracies Foundation is a non-profit organization dedicated to the advancement of democracy and free markets across the globe. 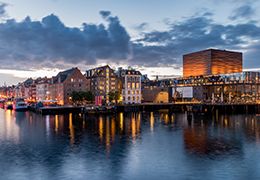 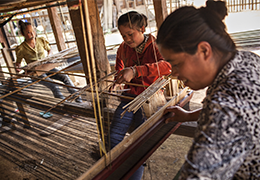 The Campaign
for Democracy 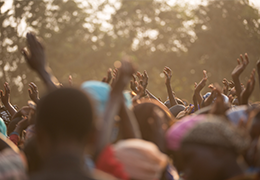 A program building a robust eco-system of supporters through a powerful online presence, continuous media engagement, and moral support for dissidents and reformers. The program includes a Transatlantic Commission on Election Integrity that works to prevent election interference. 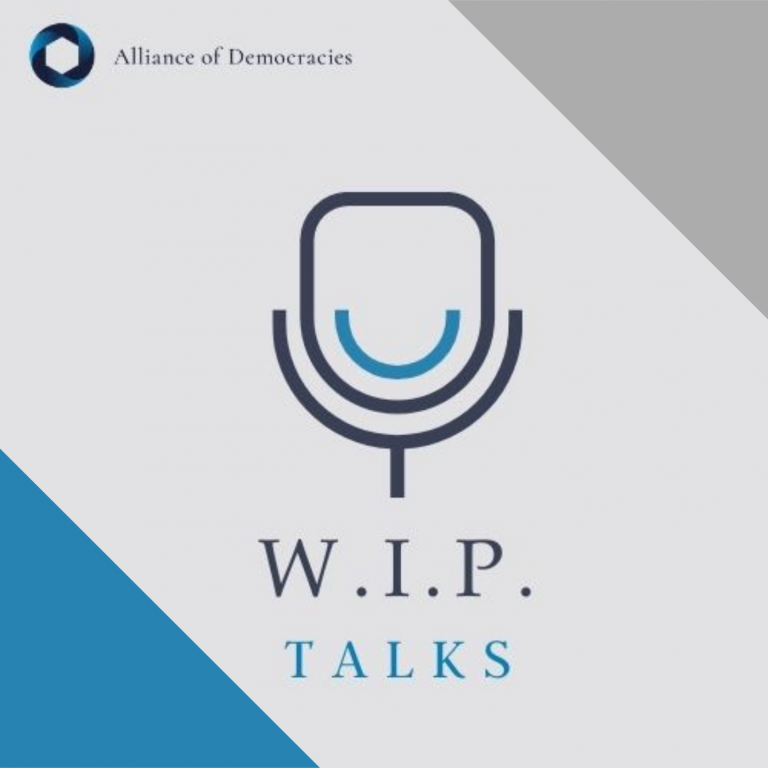 For our German speaking audience, we launched our mini-podcast series, the „W.I.P.-Talks“ covering the integrity of the German 2021 federal election.

How to Unite the World’s Democratic Forces

President Biden has promised to convene a Summit for Democracy and to renew the spirit and shared purpose of the nations of the free world. The hope is that this Summit will not be merely a one-off event, but set an agenda for democratic renewal.

UK Prime Minister Johnson has during his chairmanship of the Group of Seven (G7) included democratic allies such as Australia, India, South Africa and South Korea. This could lead to the formation of a Democracies 10/11, which would strengthen cooperation among the world’s major democracies.

The Alliance of Democracies Foundation was founded to unite the world’s democratic forces to counter rising authoritarianism and at the 2021 Copenhagen Democracy Summit, launched the Copenhagen Charterwhich proposes three specific areas for returning democratic multilateralism to its ascendancy.

And the Coalition for a World Security Community of Democracies (CWSC)

proposes a permanent forum open to leaders of all countries committed to democracy, human rights and international law. The OECD could be its implementing arm on economic issues, and NATO, which should become a global military alliance, on security issues. It could evolve into a global community on the European model and become an island of freedom, peace and prosperity in a turbulent world, attracting an ever growing membership.

Join the Alliance of Democracies Foundation in partnership with the Coalition for a World Security Community (CWSC) for an exciting discussion about making these approaches to an alliance of democracies work in practice from the G7 Summit to the Summit for Democracy. Join us on Wednesday, June 9th from 2:00 - 3:00 pm CET/1:00-2:00pm BST/ 8:00 – 9:00am ET. 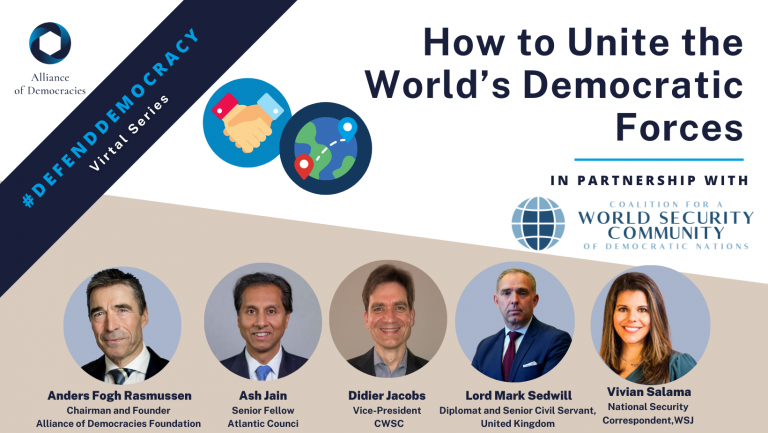 The fourth Copenhagen Democracy Summit (CDS) will convene May 10th/11th in hybrid format with contributions from political, business and media leaders around the world.

The summit, an initiative of the Alliance of Democracies Foundation, comes as President Biden – who himself opened the first Copenhagen Democracy Summit in 2018 – prepares a global Summit for Democracy later this year.

The first day of the Summit, will cover authoritarianism, rule of law, tech and democracy, freedom of expression and US leadership. Guests will hear from prominent individuals on the frontlines of defending democracy. We dedicate Tuesday, May 11th to discussing election integrity, disinformation and social media regulation in partnership with the International Grand Committee on Disinformation and Data Privacy (IGCD) and featuring a range of policymakers, experts, and members from our Transatlantic Commission on Election Integrity.

The Co-Chairs of the Transatlantic Commission on Election Integrity (TCEI) welcome US sanctions against Russia for its meddling in the 2020 U.S. election.

Michael Chertoff and Anders Fogh Rasmussen believe the Biden administration is making good on its promise and delivering a clear message that meddling and hacking comes with costs.

The Transatlantic Commission on Election Integrity (TCEI) was co-founded by Biden, Chertoff and Rasmussen in 2018 to unite transatlantic efforts in the fight against foreign election meddling.

Before announcing his candidacy for President, Joe Biden worked with the Transatlantic Commission on Election Integrity to develop a pledge for all candidates to sign, committing not to aid and abet foreign malign powers. Candidate Biden launched the pledge in 2019 and signed it himself after announcing his presidential run. 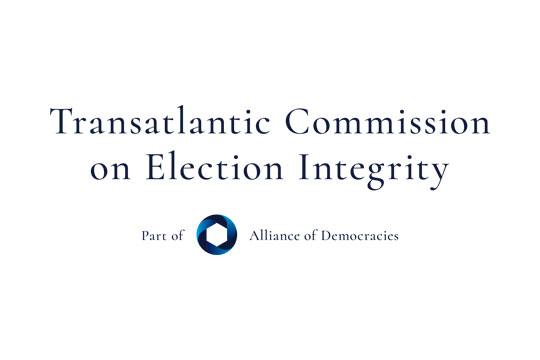 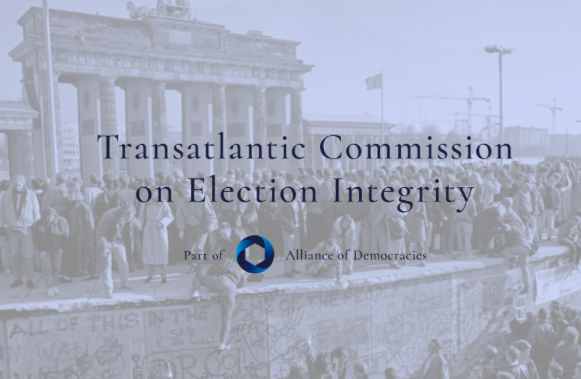 Next stop, Germany: TCEI to engage with policymakers and civil society ahead of September’s election

Germans take to the polls in September 2021, and given that the nation will elect a new head of government some 16 years after Chancellor Angela Merkel first entered office, the election poses an opportunity for foreign and domestic election meddling.

In early March 2021, media reports revealed that hackers, operating mostly from abroad, orchestrated a series of attacks during her party’s leadership convention. Meanwhile, the European External Action Service recently published a comprehensive report detailing over 700 recorded cases of disinformation targeting Germany since 2015, providing solid evidence of systematic Russian disinformation campaigns against Germany at the hands of pro-Kremlin media outlets, as well as formal and political actors. Russian-backed media outlets are pouring money into their German-language offerings, and new studies indicate that the average German voter has difficulties differentiating between journalism, commentary, political advertisements and misinformation online.

German society is resilient, and the country’s authorities are well prepared for such challenges, but there is still much that can be done to increase awareness among political parties, their candidates and the general public about these multifaceted threats to election integrity. That's why the Alliance of Democracies Foundation and its Transatlantic Commission on Election Integrity will be launching a slate of localized initiatives and tools in the coming weeks and months to engage with Germany’s citizens and its policy community. We aim to draw attention to these issues, amplify trustworthy research and analysis, increase media literacy, and provide concrete support and recommendations for preserving election integrity and defending democracy.

Follow us on social media, or sign up for our newsletter, to stay up to date on our activities in Germany ahead of September's election, which will include localized German versions of our flagship "Pledge for Election Integrity” and our online political game "The Disinformation Diaries." You can also learn more from our founder Anders Fogh Rasmussen's interview in this week's edition of German news magazine Der Spiegel.

It is becoming increasingly difficult to tell facts from fiction and technological advances are making it harder to trust even what we see with our own eyes. Election interference is by no means a new phenomenon, and the use of disinformation to change opinions of voters or sway the outcome of elections is a strategy as old as democracy itself. But recent years have seen an exponential increase of attention directed towards foreign disinformation campaigns, primarily spurred on by the Russian intervention in the 2016 US presidential election. A form of artificial intelligence and synthetic media – so-called “Deepfakes” – might take this global threat to election integrity to a dangerous new level.

We are pleased to announce that we have partnered with CanopyLAB to create a FREE online course about disinformation and deepfakes.

What will you learn?

☑️ What deepfakes are and how they can be identified

☑️ How and why deepfakes are so dangerous

☑️ What is being done to curb its negative effects

How do I take the course? 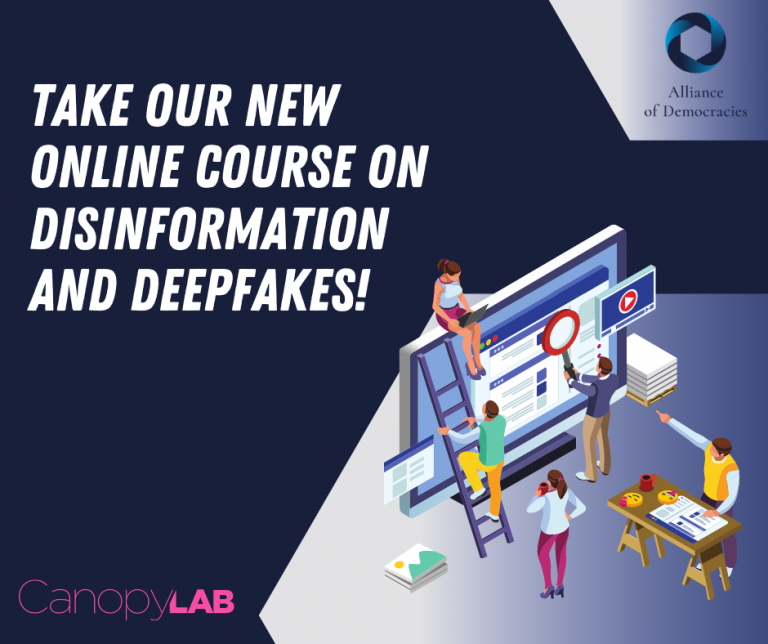 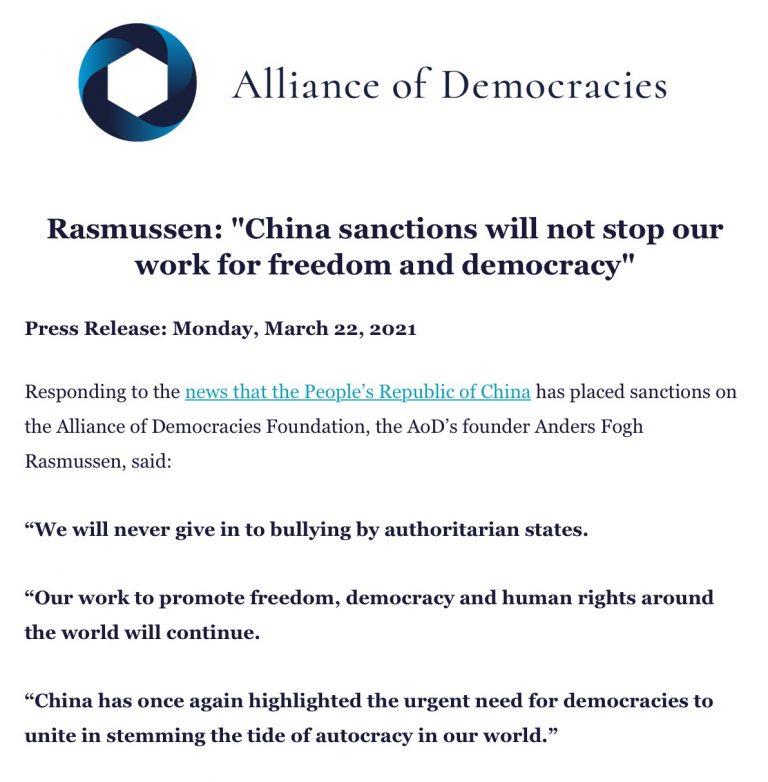 Rasmussen: "China sanctions will not stop our work for freedom and democracy"

Responding to the news that the People’s Republic of China has placed sanctions on the Alliance of Democracies Foundation, the AoD’s founder Anders Fogh Rasmussen, said:

“We will never give in to bullying by authoritarian states.

“Our work to promote freedom, democracy and human rights around the world will continue.
“China has once again highlighted the urgent need for democracies to unite in stemming the tide of autocracy in our world.”
Full press release here

Rasmussen, who now chairs the Alliance of Democracies Foundation, promoting democracy around the world, said:

“Britain and America are returning to global leadership roles. This fills me with optimism for the future of the free world and global democracy.

“The Integrated Review puts the UK at the heart of the big geopolitical challenges facing our planet, from Russia’s aggression to China’s defiance of our global rules-based order and economic coercion. The real test of Global Britain is in shaping an international order that will take the wind out of the autocrats’ sails.

“The free world has missed the UK’s active engagement, with Brexit taking up a lot of bandwidth. But in recent months we’ve seen Global Britain taking shape with its G7 Presidency, increased defence spending, and its support for democracy in Hong Kong. This Integrated Review is good for Britain, transatlantic relations, NATO, and the free world.” 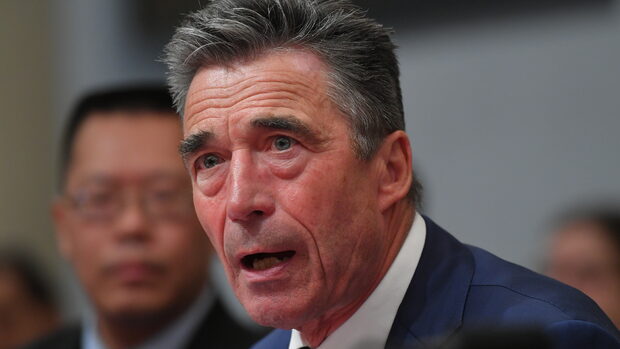 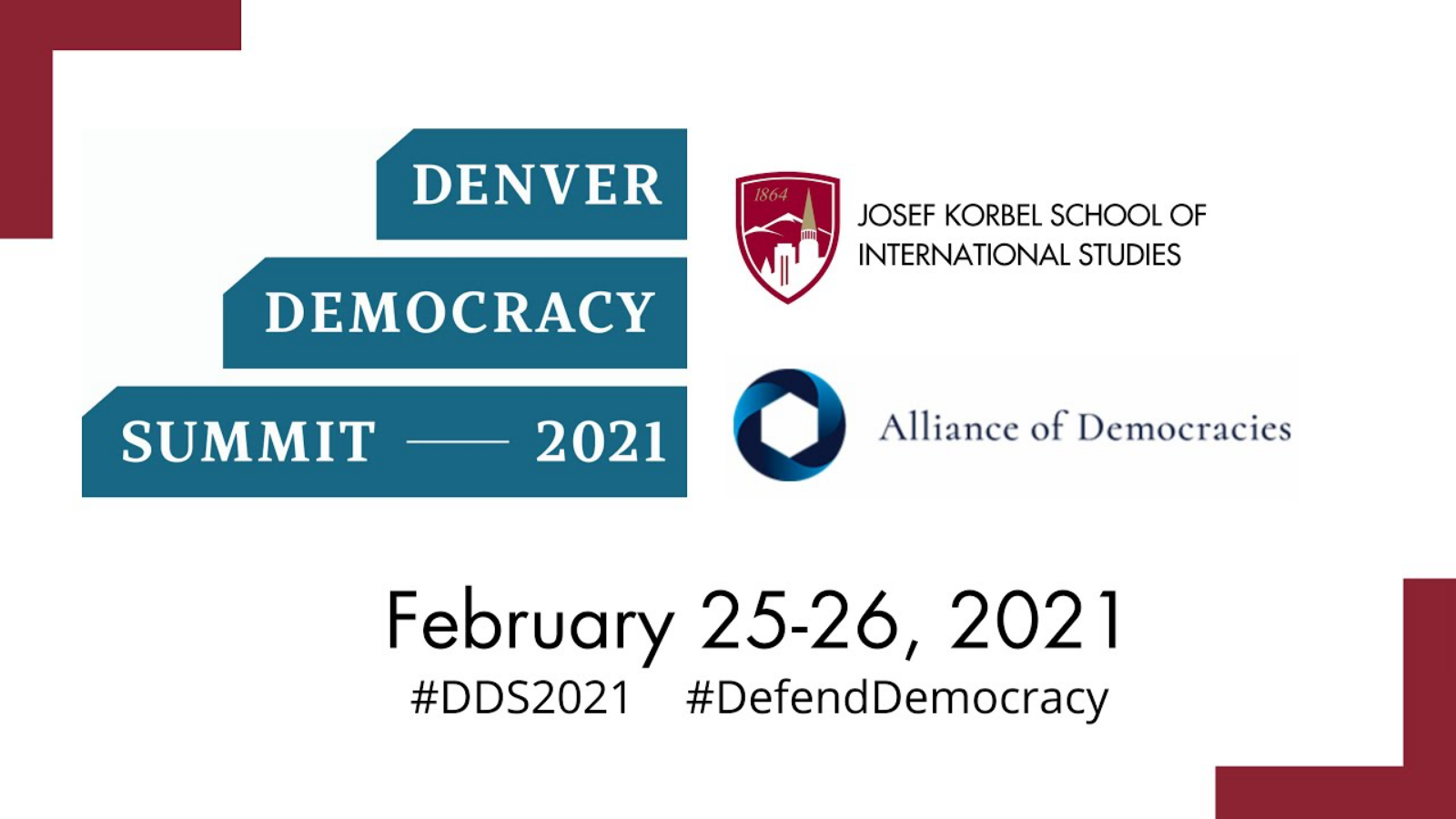 Recent events in the U.S. and around the world have demonstrated the promise and fragility of democracy in stark terms. On February 25-26, 2021 the Josef Korbel School of International Studies and the Alliance of Democracies Foundation will bring together diverse individuals from across the political spectrum who are dedicated to protecting and promoting democratic ideals. We invite you to join us virtually for timely conversations at the inaugural Denver Democracy Summit.

To find the Alliance of Democracies Foundation's previous activities, reports and media engagements go to our archive here.