Democracies are losing the hearts and minds of their citizens, world’s largest study on trust in government finds

The largest single global study measuring citizens’ trust in government indicates democracies are facing a severe crisis of faith in the eyes of the public. The Democracy Perception Index 2018 (DPI) finds that a majority of people living in democracies are disillusioned with the idea that their government is formed “by the people” and works “for the people.”

The DPI, conducted by Dalia Research in collaboration with the Alliance of Democracies and Rasmussen Global, is based on nationally representative interviews with over 125,000 respondents in 50 countries worldwide. This represents over 75% of the world’s population and 75% of the world’s GDP.

DPI survey data ranks countries on how effectively they are perceived to be delivering core democratic benefits in the eyes of their citizens, including:

Across the globe, governments are failing to convince citizens their voice matters and that institutions are acting in their best interest. More troubling, according to survey data, is the finding that public disillusionment is greater in democracies than in non-democracies. An astonishing 64% of citizens living in democracies responded their government “rarely” or “never” acts in the interest of the public. For example, the United States and the United Kingdom, long seen as leaders of the free world show glaring deficiencies. While not faring as poorly as other democracies, nearly two thirds or more of their citizens believe their governments are not acting in their interests.

Researchers noted that while citizens in democratic societies might be inherently more critical of their government than those living in non-democratic societies, perception is often as important as reality, and therefore the implications of the findings remain relevant and insightful.

Nina Schick, Director of Data and Polling at Rasmussen Global:

This groundbreaking global public opinion survey sheds light on the huge challenge faced by democracies around the world today. Democratic systems of governance are under severe threat, not only from foreign interference and the rise of autocratic regimes, but also from the huge crisis of confidence amongst the electorate. Democracies cannot afford to be complacent if they are to survive and prosper, and we are gathering at the Copenhagen Democracy Summit to begin to address these challenges.”

“Political systems around the world are currently changing with a speed that we haven't seen in almost 30 years. The key to understanding why this is happening and what to expect next is to tap into global public opinion. Right now the biggest risk for democracies is that the public no longer sees them as democratic.”

The study is being released to mark the inaugural Copenhagen Democracy Summit on June 22nd 2018, at which global leaders are gathering to discuss the challenges facing democracy.

Top findings: Citizens in democracies are the most disillusioned 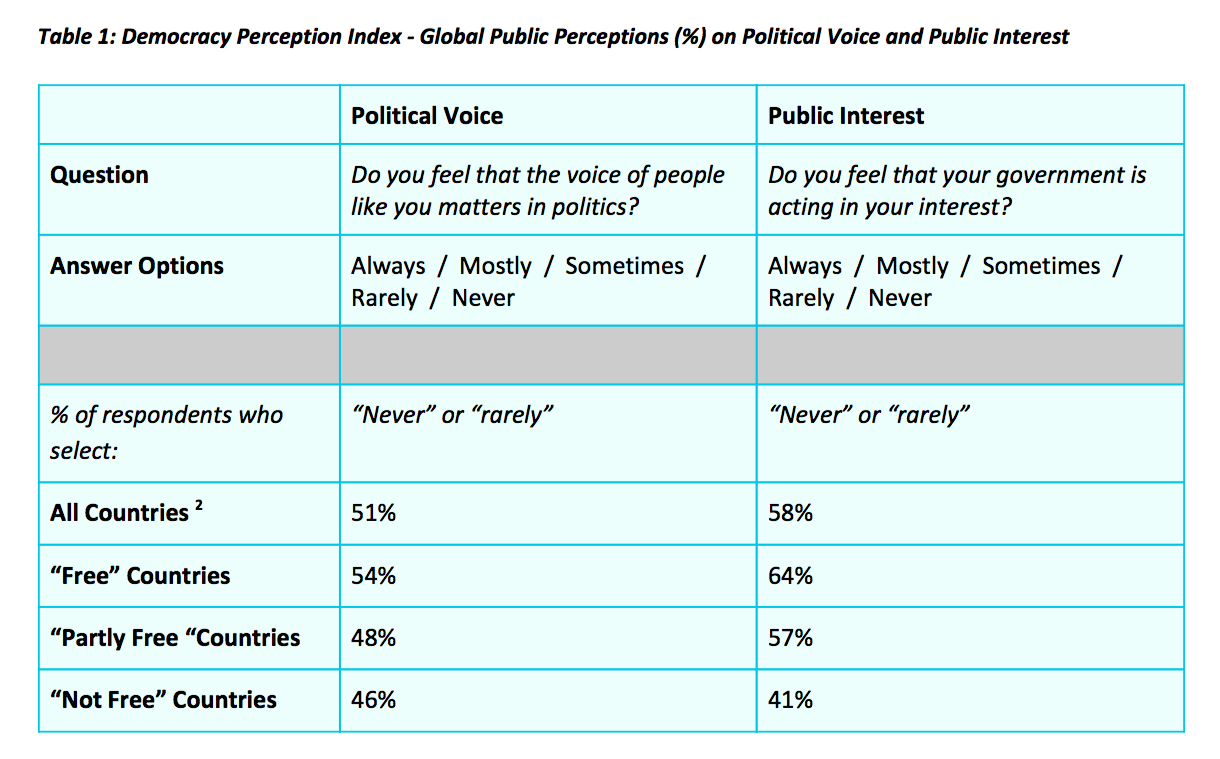 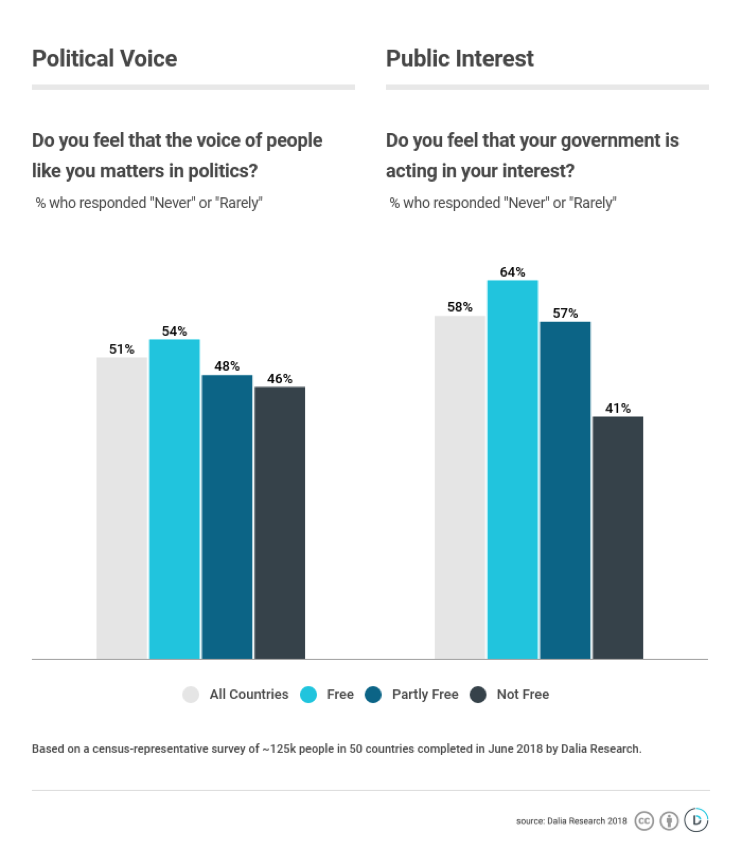 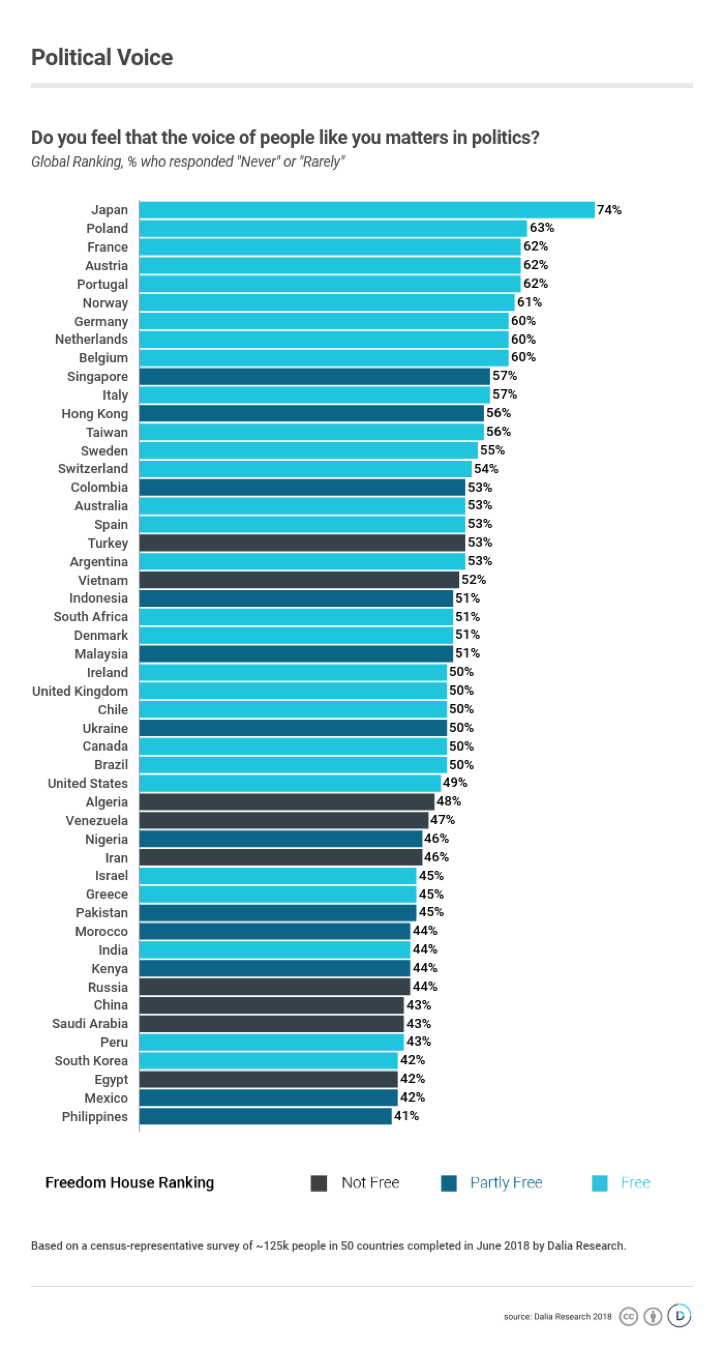 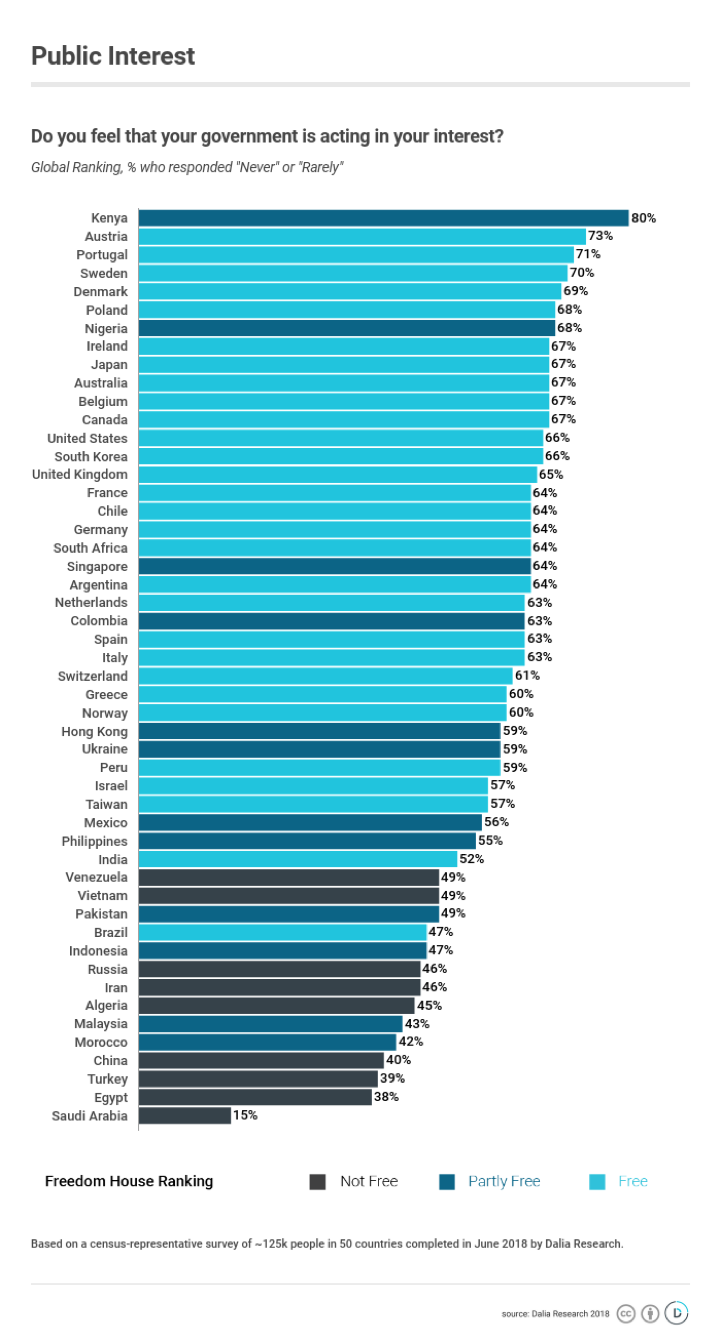 For further information contact Nina Schick, Director of Data and Polling on [email protected] or +447522115934.

Democracy Perception Index (DPI) Methodology: This report presents an overview of a study conducted by Rasmussen Global and Dalia Research between 2018-06-06 and 2018-06-18. The sample of n=125,000 was drawn across 50 countries, with country sample sizes ranging from 1,000 to 6,0003. Nationally representative results were calculated based on the official distribution of age, gender and education for each country’s population, sourced from most recent and available data from Barro Lee & UNStat, and census.gov.

Backed by some of Europe’s leading venture capital firms, Dalia is the the proud winner of several industry, technology and data awards. In 2017 Dalia also raised $7million in a Series A funding round led by Balderton Capital, with participation from existing investors Wellington Partners and IBB-Bet. Since launching, Dalia has generated over a billion answers from people in more than 100 countries. The resulting data is cited in over 2.000 news articles globally, including in leading news journals such as The Economist, Le Monde, The Guardian, South China Morning Post, El Pais, The Financial Times, Vice Magazine, The Washington Post, Der Spiegel, Business Insider, and Quartz.

Rasmussen Global: Founded in 2014 by Anders Fogh Rasmussen, Rasmussen Global is a firm with a purpose. It helps democratic governments and companies navigate a complex world by harnessing decades of political expertise with data-driven analysis. Rasmussen Global shapes and delivers winning campaigns to influence opinions, policies and decision-makers at the global, local and national levels. It brings together a team with high-level experience in government and diplomacy, with offices in Copenhagen and Brussels, and a presence in key capitals including Berlin, Paris, London and Washington DC.