Pushing Back on Authoritarian Coercion: Our Contribution to the Next Biden Summit for Democracy

We are proud to work alongside colleagues at both Freedom House and the Lithuanian Government to develop this important area of work as part of the year of action form President Biden's Summit for Democracy.

During the launch of the cohort Our Executive Director, Jonas Parello-Plesner said:

The practical work that we will take together with Freedom House and with the Lithuanian Government in our case is around economic coercion, and I think it has a very strong link for and with Lithuania because as you know Lithuania has been subjected to this completely unfair economic coercion by China because of expanding relations with Taiwan. So, what we want to do more in the cohort is to try to find a way that democracies together can counter this type of economic coercion. We’ve called it an “Economic Article 5” among democracies, that takes inspiration from NATO. Not to transfer the military to the economic area, but to transfer the solidarity, to transfer the deterrent over into the economic field so that democracies together could do more in a case like Lithuania to protect against this type of coercion.

You can read our full concept note by clicking here. 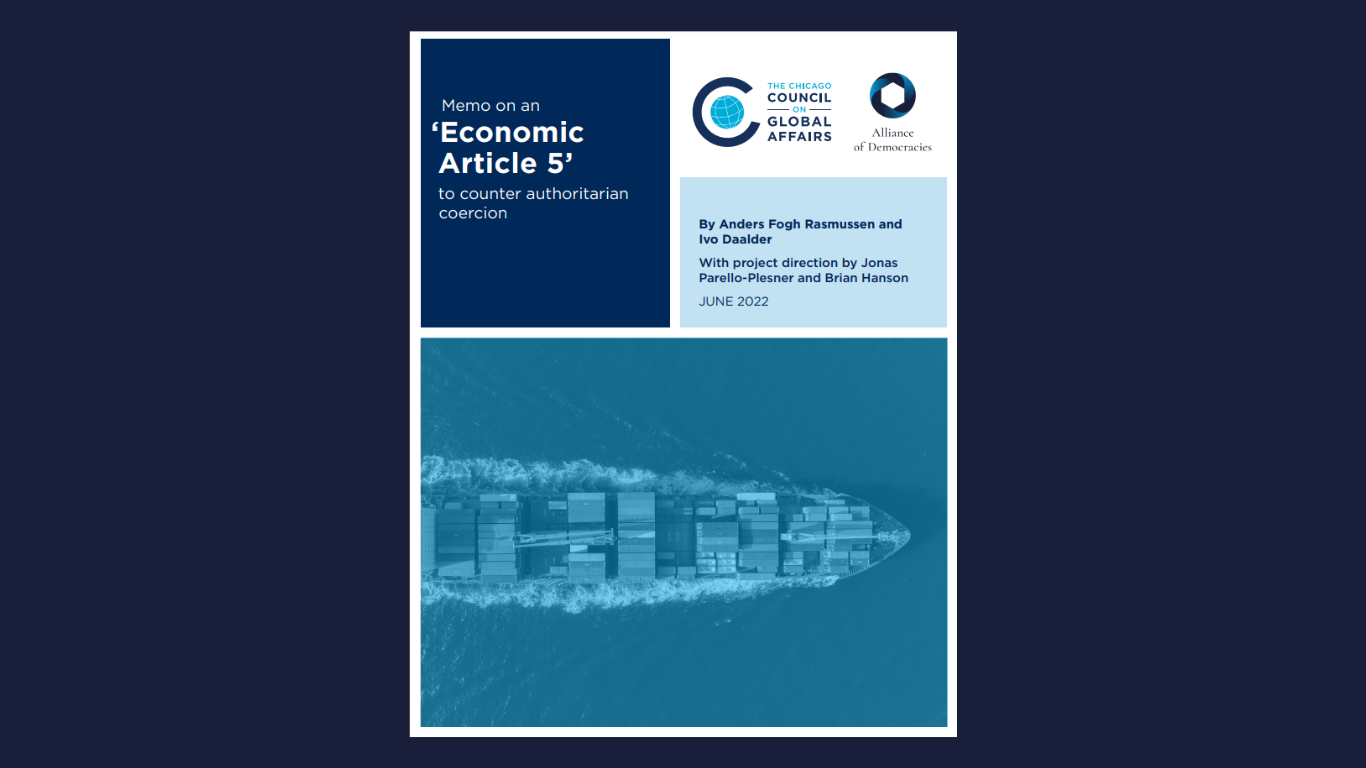 As part of the Year of Action initiated by President Biden’s Summit for Democracy, a group has been formed that aims to tackle the rising threat of authoritarian pressure. The Resisting Authoritarian Pressure (RAP) cohort, co-run by the Lithuanian Ministry of Foreign Affairs, Freedom House, and the Alliance of Democracies (AoD), was officially announced during the second Future of Democracy Forum in Vilnius, on November 10, 2022. The purpose of the cohort is to build resilience to authoritarian coercion and offer support to democrats and human rights defenders working in non-democracies.

Rationale for the Cohort

The time for democracies to collectively resist authoritarian pressure is long overdue. Russia’s barbaric, illegal invasion of Ukraine highlights a need for urgent international actions. Appeasement and hopes to achieve behavioral change in autocracies via positive means of cooperation, such as trade, are futile when facing aggressive authoritarian regimes. Without additional safeguards and policy measures, peaceful cooperation principles only encourage hostile autocratic regimes to pursue further acts of aggression against their own populations and neighboring countries.

Examples, such as Alyaksandr Lukashenka’s regime in Belarus, which is currently holding nearly 1400  political prisoners according to Viasna and is serving as a platform for the Russian invasion of Ukraine, show that decades of tireless work by the diplomatic community to soften such regimes have not succeeded. Likewise, Russian president Vladimir Putin’s regime has repeatedly tried to leverage its economic influence, especially in the energy sector, to discourage other countries from providing support to Ukraine as it defends its sovereignty. The RAP cohort encourages the democratic world to halt its engagement with autocrats and to refocus its efforts on helping those working for democratic improvements in the most unfree environments.

The “Resisting Authoritarian Pressure” cohort will focus on the following four areas:

The cohort will focus on achieving specific deliverables ahead of the second Summit for Democracy, in partnership with other governments and civil society organizations, that are both private and public and intended to increase resilience to malicious authoritarian activity and address the four foregoing topics.

The first Summit for Democracy was held on December 9-10, 2021, during which participating democratic governments from around the world gathered and pledged concrete actions to advance democracy at home and around the world in the areas of strengthening democracy and defending against authoritarianism; fighting corruption; and promoting respect for human rights. The first Summit gathered a diverse range of representatives of governments and multilateral institutions, activists, journalists, parliamentarians, human rights defenders, mayors, and business and labor leaders. A second Summit for Democracy is planned for the first half of 2023.

The organizers of the Summit for Democracy have encouraged participants to create cohorts (i.e., working groups) among governments, civil society groups, private businesses, and other actors to encourage international coordination in individual areas aiming to strengthen democracy globally. As of today’s announcement of the “Resisting Authoritarian Pressure” cohort, there are currently nine other officially launched cohorts—and the number continues to grow. The “Resisting Authoritarian Pressure” cohort also strongly supports the efforts of other cohorts, particularly those working on media freedom, resilience against disinformation, and financial transparency—all of which are critical aspects of restricting tools for autocrats to build influence in democracies.

The Future of Democracy Forum was organized in Vilnius, Lithuania, for the first time in 2021 in preparation for the first Summit for Democracy. Building on Lithuania’s successful democratic transition after achieving independence in 1990, the Lithuanian government plans to turn the country into a hub for democracy, and to make this Forum an annual event where high-level politicians, diplomats, think-tank members, academics, and democracy activists regularly meet to discuss the most pressing challenges posed by authoritarianism. The second Future of Democracy Forum took place on November 9-10, 2022, and attracted around 150 high-level participants, including high-ranking government officials and diplomats, leading officers of international support organizations, and influential public opinion makers, such as Anne Applebaum and Zhanna Nemtsova. Dozens of democracy activists representing the World Liberty Congress—held in Vilnius on November 7-9, 2022—also joined the Forum. World Liberty Congress gathered almost 200 activists, including Venezuelan activist and Sakharov Prize laureate Leopoldo Lopez, Russian activist and former chess world champion Garry Kasparov, Iranian journalist and activist Masih Alinejad, and former Ugandan presidential candidate Bobi Wine, among others. In total, almost 50 countries were represented at the Future of Democracy Forum.